Supporting First Responders and their Families

The First Responder coalition exists to ensure the optimum mental health and psychological health and safety of all first responder organizations and employees as well as family members of employees and retirees. The Needs Assessment reflects Priority #2 of this coalition: The coalition will work together to develop strategies and programs to address the continuum of mental health issues known to impact First Responders and their families. It contributes to the objective: Assess the need for mental health support services among immediate family members of First Responders and develop and/or implement evidence-based strategies to meet those needs.

First Responder Families Needs Assessment was open from March 13 – May 31, 2019. 2,691 people responded to the 16-question survey. The results of the survey are below.

Survey Question: How often are you observing the following behaviours or symptoms in the first responder in your life? 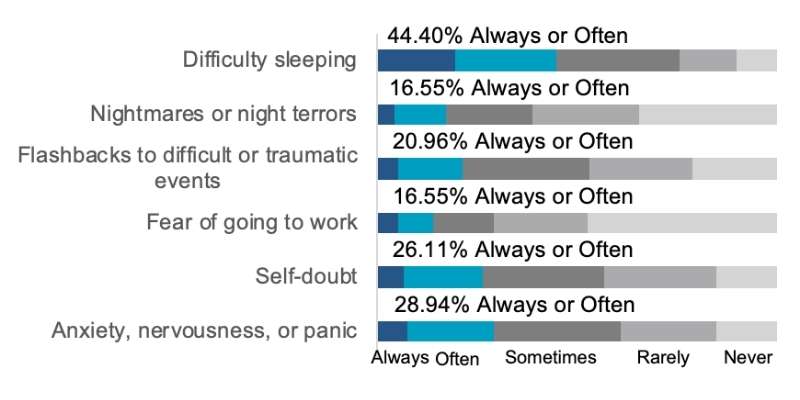 Family members observe substance use or addictive behaviours in the first responder in their lives, with the most common being alcohol use (23% always or often). Alcohol and marijuana use was most concerning to family members of full-time first responders. We have not compared this data to the general population.

The survey asked family members if the first responder in their life experienced any symptoms of Post Traumatic Stress for at least one month following a traumatic call/ event. Family members were most likely to report difficulty sleeping and being easily irritated or angered; followed by emotional numbness; re-experiencing the trauma through intrusive distressing recollections of the event, flashbacks, and nightmares; difficulty concentrating; and, feeling jumpy or on edge.

Over 50% of family members were somewhat or very interested in receiving support for their own resilience and mental wellbeing.